Yafaiian is a combination word of yafayafa, Okinawan for “soft wind”, and Hawaiian meaning “soft wind that blows in Hawaii”.

This trio from Ishigaki island in Okinawa consists of Eisho Higa (Vocals/Guitar/Sanshin/Ichigo Ichie/Washboard), Masaru Shimabukuro (Guitar/Ichigo Ichie/Chorus) and Hitoshi Uechi (Piano/Accordion/Chorus) artfully melds traditional Okinawan shimauta (island music) with more contemporary j-pop qualities, and they also throw in a good amount of American jazz and even a dash of Hawaiian influence in many songs. Their popularity is wide ranging all over Okinawa, across Japan, and around the world, and especially among the Uchinanchu community here in Hawaii. In fact, the music from popular Keali‘i Reichel song Ka Nohona Pili Kai was borrowed from Begin’s Nada Sou Sou.

Luckily for us here in Hawaii, the members of Begin understand, embrace, and promote the special bond that the Ryukyu and Hawaiian islands share. Not only because of the similar tropical climate and resort destination qualities of the two, but because of the human bond that is shared among the people of both places, the shared cultures and even the beautiful ocean. Because of this special relationship, and Begin’s love of the Hawaiian islands and people, they are often visiting Hawaii for concerts, other performances, and even to just visit. This year Hawaii was treated to a special concert by the musical group. Even though it was pouring rain at some points, it was still a fantastic experience. 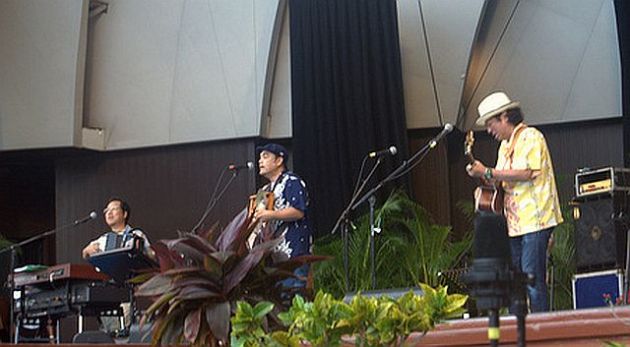 The band was also accompanied by Ryukukok Matsuri Daiko Hawaii for a few of their songs.

Some of the Ryukyukoku Matsuri Daiko Hawaii performers

After the concert the members of Begin were gracious enough to have a meet & greet/autograph session for the fans who were patient enough to wait in line. Luckily by then the rain had stopped for a while, and we were slowly starting to dry off.

I truly can’t wait for the next time I get to see Begin live!

Adulting is a Bitch
ono okinawa

A slice of Okinawa: Eating, Living, Traveling as a foreign student in Okinawa, Japan.

Artisanal Locally Made Gelato in Hawaii

Just another blog with a twist of lemon